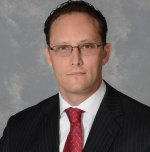 Rob Hyman has extensive experience as a litigation attorney throughout the state of Florida. Representing clients in their various commercial litigation and creditor’s right’s needs, Mr. Hyman has conducted thousands of hearings in both state and federal courts since his admission to the Bar in 2003.

Beginning his career as an Assistant State Attorney for the Seventeenth Judicial Circuit, Mr. Hyman spent most of his time in court either in trial or conducting evidentiary hearings. Upon fulfilling his three-year commitment at the prosecutor’s office, Mr. Hyman began his commercial litigation practice with a prestigious Fort Lauderdale based law firm. Subsequent to this, Mr. Hyman was hired by a large Atlanta based firm to head its Fort Lauderdale commercial litigation department. While working for this Atlanta based firm, Mr. Hyman litigated multimillion-dollar real estate cases in the state, appellate, and bankruptcy courts.

During Mr. Hyman’s career he has represented large multi-national funds, preeminent banking institutions, private equity groups and Fortune 500 Companies. Additionally, he represents local businesses of all sizes in the South Florida community, providing comprehensive counsel for all their legal needs.

Mr. Hyman received his law degree from Rutgers University School of Law in Camden, New Jersey and earned his undergraduate degree in Biology from the University of Miami, where he played collegiate rugby for the Hurricanes.

Mr. Hyman was admitted to the Florida Bar in 2003 and is admitted to practice in all state and federal courts in the state of Florida as well as the United States District Court for the Southern District of Texas. Mr. Hyman has also been admitted to practice before the Eleventh Circuit Court of Appeals. He is a member of the Rotary Club of Fort Lauderdale and an avid Brazilian Jiu-Jitsu practitioner.